I’ve been a happy holvi customer since 4 years, got early access to their API so I could automate purchases without having to go through the holvi online shop. This was awesome! The reason why I chose holvi at first was that with the Romanian company I mostly do business in Euro but Romanian bank fees are insanely stupid. Payments to a EURO account outside of Romania would amount to 11 Euro! Now Imagine paying monthly for something worth 22 euro and the bank would charge you additionally 11 Euro for the transaction, I mean, wtf?? Since I didn’t know about transferwise at that time, holvi was the solution for me. After being on a waiting list for several months I finally got my account. Everything was simple to set up and after over a year I finally received a holvi credit card as well, sweet.

The “go fu** yourself” email

But now after almost 4 years I suddenly received a support email from holvi, you might know the ugly email from zendesk, so I didn’t think much about it since they send such emails from time to time to announce maintenance or other issues. 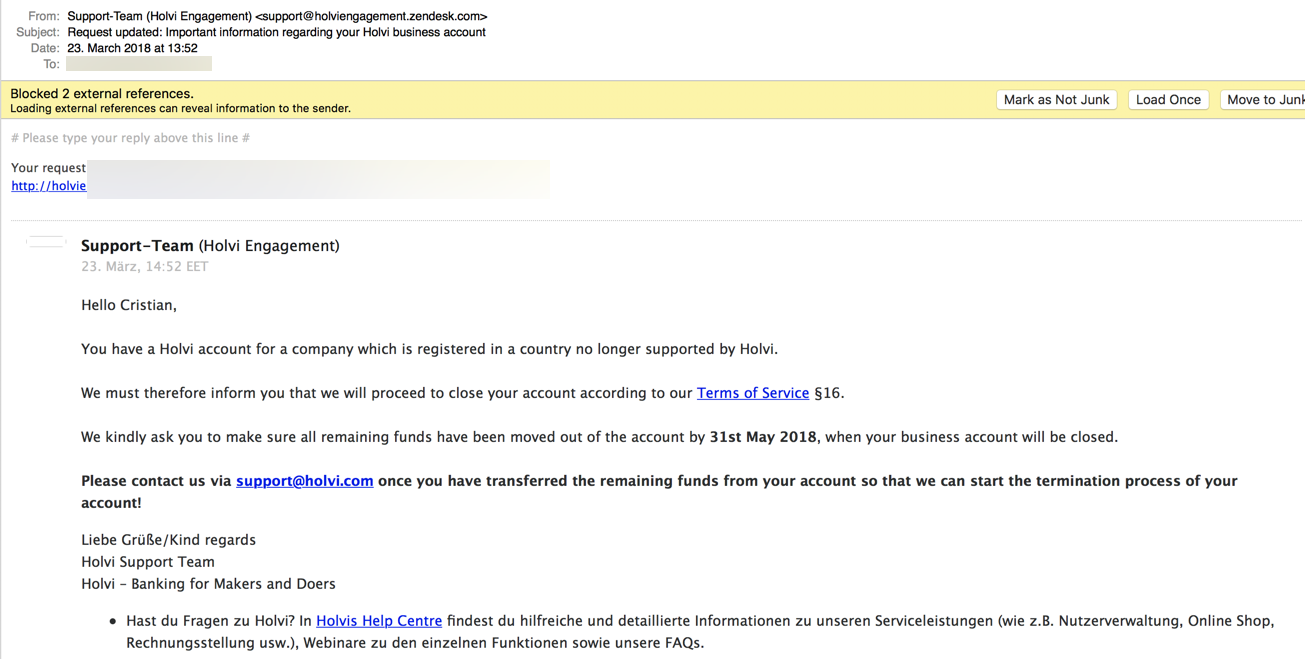 I like how the subject even says “Request Updated:” as if I have asked for support and just received a new answer. But I was kind of shocked when I opened the email and read:

You have a Holvi account for a company which is registered in a country no longer supported by Holvi.

My first reaction was: this must be an error, it happened before that I received an email regarding cancelation since an account to which I had access but wasn’t mine, was declared as a personal account. After several emails back and forth it was clear to me that this was no error and my account will be terminated in two months. Now, imagine being a business and having two months to change account data. The website, newly printed material, invoices, software, announce clients, change SEPA direct debits etc etc etc. It’s not as if I could flip a switch and everything is changed, there is a lot of manual work implied here so 2 months seem rather short. Now that those two months are over and my account was terminated yesterday I noticed that I can’t even access any reports for that account. This means that everything I need for the accounting from last month would be gone! Happily, we thought about that, saved the reports some days ago and holvi support did deliver me a PDF after a short rant at the support team.

Here is what I think that holvi did completely wrong. I get the part that processes change, customers can’t be supported anymore or any other reason. But being a business bank they must understand that changes like this take time. Two months is much to short for this, so some kind of slow migration over 6 months would have been much better.

The thing that stings me the most was the way this was done. I have no clue how many people were affected by this change but I would have expected a call or at least some other way of writing the mail and not via a zendesk support email, after all, we have been working together for several years. That mail and the tone of the following emails were perceived by me like a big “go fu** yourself, we don’t care about you”. Especially the line regarding “close your account according to our Terms of Service §16.” which sounds like I did something wrong.

The next issue was the account lockout. That I can’t receive payments and can’t make payment … I got that. But why do you have to lock me out of my account one day after the “termination”? I did after all have some transactions last month and it’s common sense for every business person that I still need the account statements from that account.